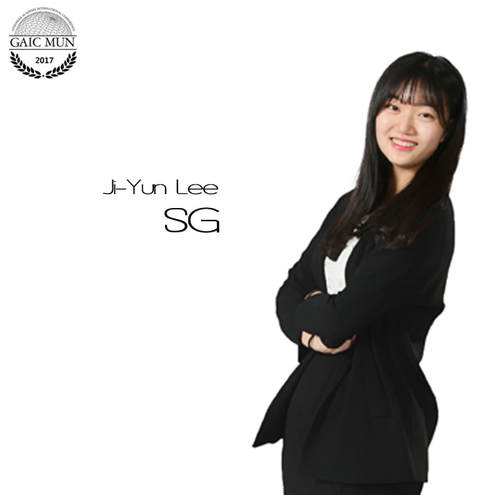 Dear Delegates, Parents, and all participants

This is June Jiyun Lee and it is such an honor to serve as the Secretary General for GAIC-MUN 2017. The GAIC-MUN Secretariat is proud to announce our 4th session which will be held from August 11th to 13th, 2017 at Gyeonggi Academy of Foreign Languages.

GAIC-MUN is one of the significant MUNs as it offers an interesting agenda along with skillful student officers, and gives a great opportunity to experience ‘real’ cooperation and communication. In this fruitful conference, delegates can eagerly debate, journalists can write high quality newspaper articles, and the staff members will manage the overall ambience during the conference. With about 300 participants, GAIC-MUN 2017 will be the best chance to gain unforgettable memories and develop new friendships.

We are excited to announce that our new theme for this year is “Action for Humanity.” Through fruitful debate, I hope all delegates would be able to develop a broad perspective about living in the global society. Take a chance to express your own opinion in the international conference of Humanity.

As the Secretariat and GAFL Executive Team are continuing preparations for GAIC-MUN 2017, be sure to follow our Facebook page here, and get further information in GAIC-MUN weebly page here. I hope to see you in August!

Thank you for your interest in our conference.